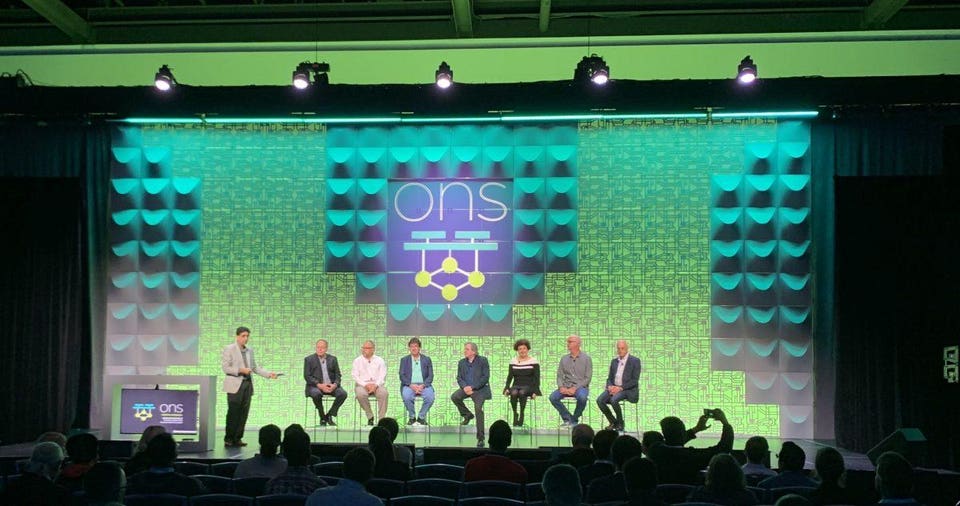 The main stage at the Open Network Summit in San Jose.

I’ve written before about the Linux Foundation and the power of open, standards-based networking. Open source is having a significant impact in both the enterprise and with carriers around the globe. It’s also rubbing off on companies such as Cisco Systems, who are embracing a design philosophy that no longer locks customers into a specific networking stack. I recently had the opportunity to attend both the Open Source Leadership Summit (OSLS) in Half Moon Bay and the Open Network Summit (ONS) in San Jose. I would like to share some of my thoughts and insights from both events.

The tech industry is fiercely competitive. I can personally attest to this having worked for Dell and Compaq in the 1990s as a product marketer. What strikes me about the Linux Foundation is that many of its initiatives are co-led by competitors. In my mind, the first superpower of open source is collaboration. Most if not all of the contributors have “day jobs,”  but they set aside any corporate animosities in the spirit of furthering development efforts for the greater good of the community. I witnessed these collaborations first hand at ONS as I sat though several breakout sessions.

I also attended an Ericsson session and was impressed to learn about the company’s efforts in exposing APIs and leveraging open source to drive innovation and create new monetization opportunities for operators. Of all the “big infrastructure” providers, I believe Ericsson is making significant inroads here—as evidenced by recent earnings. I’ve also published a report titled Ericsson Reinvented, which you can find here if interested.

Another open source superpower is value creation. One presenter at OSLS compared the process of commercial development efforts with the likes of Microsoft versus open source. Commercial approaches are typically tied to venture capital funding and/or an IPO, with centralized R&D and more complex and expensive distribution systems. In that scenario, only two constituents capture value—the vendor and the customers of the vendor that pay. On the other hand, open source is decoupled from venture capital constraints, with a decentralized approach to R&D and a highly agile and free distribution system. As a result, a greater number of constituents benefit—cloud providers, hardware companies, system integrators, service providers, governments, and both the commercial and open source software companies themselves.

Educational institutions, such as the Center for Research in Open Source Software (CROSS), also play a pivotal role in open source innovation incubation. I was impressed by CROSS’s presentation at OSLS on its achievements and efforts to produce future leaders in open source software.

A third superpower of open source from my perspective is harmonization. Harmonization is the notion of drawing together projects and standards to accelerate development. Today the Linux Foundation hosts 9 of the 10 largest open source networking projects and it recently launched LF Edge to address the growing momentum for edge deployment and the need for an open, interoperable development framework. This was also communicated at ONS from representatives of organizations such as 3GPP, ETSI, OCP, TIP, MEF, TM Forum, and the Linux Foundation, who came together to discuss collaboration efforts to accelerate networking innovation.

Disclosure: My firm, Moor Insights & Strategy, like all research and analyst firms, provides or has provided research, analysis, advising, and/or consulting to many high-tech companies in the industry including Cisco Systems, Dell, and Ericsson, cited or related to this article. I do not hold any equity positions with any companies cited in this column.