Realme C1 ₹ 7,549 has received two new variants in India. The Chinese company on Monday announced the launch of the Realme C1 (2019) 2GB RAM/ 32GB storage variant and the 3GB RAM/ 32GB storage variant. Originally, the Realme C1 was introduced in the country in lone 2GB RAM/ 16GB storage configuration. The smartphone also packs a Qualcomm Snapdragon 450 SoC and a 4,230mAh battery. It is worth noting here that the arrival of the Realme C1 (2019) variants comes just ahead of the Samsung Galaxy M series debut that is expected to include a budget model, called the Galaxy M10.

The Realme C1 (2019) price in India has been set at Rs. 7,499 for the 2GB RAM/ 32GB storage variant, whereas the 3GB RAM/ 32GB storage counterpart will retail at Rs. 8,499. Both new Realme C1 variants will be available for purchase through Flipkart starting 12 noon on February 5. The phones will be offered in Deep Black and Ocean Blue colour options.

Realme also plans to sell the new Realme C1 (2019) models via the offline retail stores, but it hasn’t specified any concrete schedule for the offline sale.

To recall, the Realme C1 was launched in India back in September last year with an introductory price tag of Rs. 6,999.

Apart from the new RAM and storage options, the Realme C1 (2019) Edition is identical to the original Realme C1 model that was launched last year. The smartphone sports an artificial intelligence (AI) powered dual rear camera with a software algorithm to enhance images. There is also an AI-backed selfie camera that is touted to recognise 296 points. Further, the phone has facial unlock as well as a SmartLock feature and comes pre-loaded with power saving features, dubbed App-freezing Power Saver and Quick App Freezing.

The dual-SIM Realme C1 runs Android 8.1 Oreo with ColorOS 5.1 skin and features a 6.2-inch HD+ (720×1520 pixels) display that delivers 360 nits of brightness and has a Corning Gorilla Glass panel. There is also a display notch and the screen includes a 19:9 aspect ratio. The smartphone also has an 88.8 percent screen-to-body ratio.

Under the hood, the Realme C1 has an octa-core Qualcomm Snapdragon 450 SoC, coupled with up to 3GB of RAM and Adreno 406 GPU. The new Realme C1 also comes with 32GB of onboard storage that is expandable via microSD card (up to 256GB).

The Realme C1 has a dual rear camera setup that includes a 13-megapixel primary sensor and a 2-megapixel secondary sensor — along with an LED flash. For selfies, there is a 5-megapixel sensor at the front. The smartphone also comes preloaded with a portrait mode, PDAF, and an Intelligent AI Beauty feature.

In terms of connectivity, the Realme C1 has 4G VoLTE, Wi-Fi, Bluetooth v4.2, GPS/ A-GPS, Micro-USB, and a 3.5mm headphone jack. Sensors on board include an accelerometer, ambient light, G-sensor, M-sensor, and pedometer. Besides, the smartphone packs a 4,230mAh battery and measures 75.6×156.2×8.2mm. 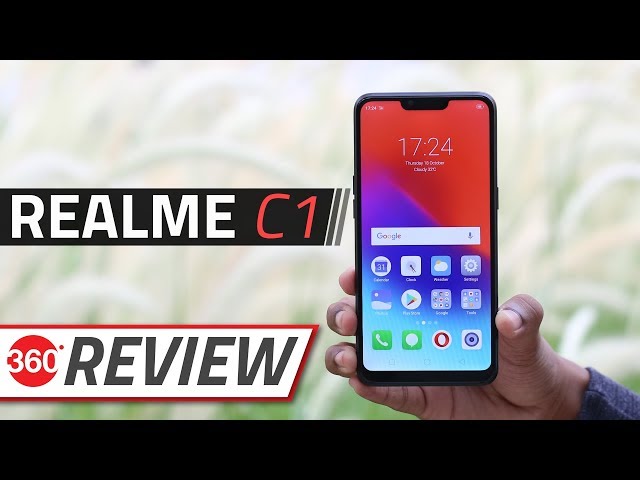